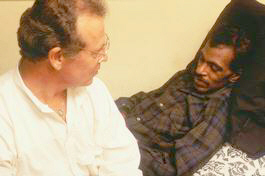 Maryknoll missioners have worked in ministries focused on persons living with HIV and AIDS since the early 1980s, before the extent of the pandemic would be known, long before the loss of millions of lives from AIDS. In the ensuing years, Maryknollers have accompanied people dying of AIDS, worked with children orphaned by AIDS, supported women and girl children who are at risk of violence or sexual abuse, and witnessed the direct impact of debt, trade issues and poverty on societies being decimated by AIDS.

Maryknoll submits testimony to U.S. House of Representatives' Appropriations subcommittee on State, Foreign Operations and Related Programs during its discussion of Fiscal Year 2012 Budget Request for PEPFAR and the Global Fund, April 13, 2011

“AIDS has by far many more profound repercussions of a moral, social, economic, juridical and structural nature, not only on individual families and in neighborhood communities, but also on nations and on the entire community of peoples.” Pope John Paul II to a Vatican AIDS conference, 1989

Catholic social teaching makes reference to “the equal dignity of each human person in one human family; the call to equity in sharing resources; the call to overcome exclusions, discrimination...; the priority of the poor and vulnerable in a call to solidarity...”. In a world of HIV/AIDS, our serious response to Catholic social teachings is shaped by the following realities:

The Maryknoll Office for Global Concerns invites you to participate in the education and advocacy efforts on HIV and AIDS, in particular promoting:

UNAIDS is an excellent resource for new reports, updates on the Global Fund, press releases on global initiatives to combat AIDS and information on the spread of Global AIDS.

The National Council of Churches of Christ (NCCC) Program Committee on Education For Mission has an extensive listing congregational resources from denominational and ecumenical sources at their site.

These books and videos can be found at www.maryknollmall.org. Search for the editor/author’s name or by title:

Women in the Time of AIDS: Women, Health and the Challenge of HIV Gillian Paterson (1996)