More and more people of faith are committed to embracing their own power and obligation to create a human economy that fits within Earth's ecological boundaries while it serves human needs. One of the great responsibilities inherent in that commitment is to work actively toward returning corporations to their proper place in society. Corporate influence has changed the face of public policy, distracting lawmakers from working for the common good. In addition, multi-country trade agreements can put into place an economic regime built on de-regulation, offshoring, and an exchange of national sovereignty for the sake of corporate interests.

The U.S. Trade Representative's office has been hard at work crafting a free trade agreement (FTA) with countries whose borders lie along the Pacific Ocean. The Trans-Pacific Partnership (TPP), currently being discussed in Australia, proposes to bind together the U.S. and eight partners: Australia, Chile, Peru, Singapore, Brunei, Malaysia, New Zealand, and Vietnam. Talks on this agreement have been held in strict secrecy for years, beginning under the George W. Bush administration around 2002. Occasional leaks reveal discussions that do not bode well for common good-centered trade.

The plan is eventually to include every Pacific Rim nation. Mexico, Canada, the Philippines, South Korea and Taiwan all share an interest in joining. 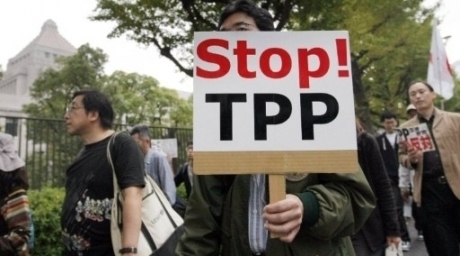 Japanese Prime Minister Yoshihiko Noda has expressed his intention to participate, though this raises concerns among Japanese farmers who fear they will be devastated by the FTA. Japan faces an uncertain future as it attempts to rebuild after last year's earthquake, tsunami and nuclear crisis, to deal with an aging and declining population, and to define its role in the context of a rising China and a fast-changing Asia Pacific. People in Japan remain cautious with memories of the 1997 financial crisis that impacted much of southeast Asia.

The negotiations' secrecy has been a major issue. Civil society groups have had to rely on leaked texts to learn the content of the discussions, and are raising concerns about a number of issues including intellectual property laws, lax financial sector safeguards, and foreign investor protections.

In terms of intellectual property, aspects of the TPP now being negotiated would alter current policy regarding affordable HIV and AIDS drugs. Civil society critics say that under the proposed agreement, intellectual property barriers would be expanded, enabling pharmaceutical companies to hold or renew patents for longer, which limits the availability of generic medicines and treatment. Around the globe, prices of medications to treat HIV and AIDS have fallen dramatically in the past 20 years largely due to intellectual property rules that allow for more widespread access to patents that were previously guarded by major money-making players like the Pharmaceutical Research and Manufacturers of America (PhRMA).

Regarding foreign investor protections, tobacco has become an issue. Under the TPP tobacco manufacturing companies would be permitted to sue governments that impose rules on packaging, such as requiring warning labels on the health risks associated with using the product. This ability to sue would neutralize an aggressive labeling campaign in Australia which takes aim at reducing the number of teen smokers, and would make obsolete recent moves by the U.S. Food and Drug Administration to make labels on tobacco packaging more explicit.
Negotiations continue until March 9 in Melbourne; the lack of transparency remains a critical topic. Without knowing what is in the text, it is impossible for the majority of people who will be impacted by the agreements to have a voice in how they are made.

Write to President Obama and tell him to stop promoting trade agreements like the TPP that empower corporations and ignore the common good.

Photo of Japanese farmers protesting the TPP in Tokyo from the Tengri News website.