The financialization of nature

The 2008 food and energy price bubbles were only the latest in a series of crises for major investors who had become accustomed to the high returns of the 1980s and 1990s. In a desperate quest to find and create new markets with high profit potential, investors, with hundreds of trillions of dollars on hand, are quickly changing the "ownership" of nature and how land is used around the world. In countries where Maryknoll works, the result has been higher and more volatile food and energy prices, increasing conflicts over land, displacement of families and a notable shift away from local decision-making around land use. This "financialization" of nature is an overwhelming reality that will frame many struggles in coming years.

Antonio Tricarico, coordinator of the Italian organization Campaign for World Bank Reform, explains the concept well: "We live in a time of finance capitalism, when trading money…is more profitable [than] trading goods and services… That is in short what people refer to often as 'financialization' of the economy… as more and more aspects of everyday life – from home ownership to pensions and schooling – are mediated through financial markets rather than just markets."

For more than three decades, international financial institutions have pressured governments to privatize the production and distribution of natural resources (mining, water delivery systems, energy utilities, etc.), but a more recent phenomenon is the growing encroachment of the financial sector in the ownership of the natural resources themselves.

The dot.com bubble in 2000 sent many stocks reeling and led many large investors (pension funds, hedge funds, endowments, sovereign wealth funds, etc.) to transfer large sums of money out of stocks into the real estate sector, creating a bubble that started to weaken in 2005.
In order to make up for losses in the housing market, investors pushed hundreds of billions of dollars into commodity markets, making long-term bets that the price of food and oil will increase in coming years. This massive influx of money led to the food and energy price bubbles of 2008. Remember $4 gasoline and food riots around the world? 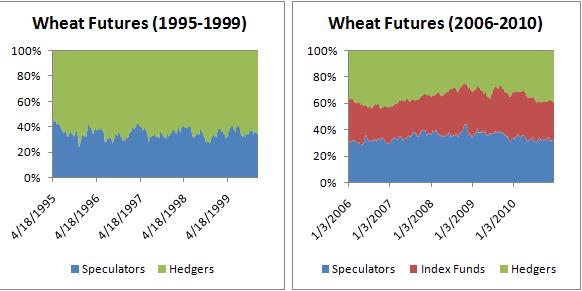 Until 1999, 60 to 80 percent of wheat markets were represented by "legitimate hedgers" (wheat farmers and their buyers) with speculators comprising only 20-40 percent. With the addition of index funds (the tools that pension funds and other major investors use to speculate on commodity prices, very popular since 2005), speculators now outweigh legitimate hedgers, comprising 60 to 75 percent of the wheat market since 2006. Similar changes have occurred in other food and energy commodities.

With financial players now dominating these markets, world food and energy prices have become more heavily influenced by investment decisions rather than supply-and-demand fundamentals, resulting in higher charges and increased price volatility. Though arbitrary prices are bad for farmers and businesses, financial players can reap huge profits with high fluctuation.

While commodity markets have become the latest playground for large pools of money, Wall Street, with the aid of some governments, scientists and NGOs, is working to develop new markets to take advantage of impending shortages in a variety of natural resources.

Large institutional investors are increasingly buying farm land around the world as another good way "to balance their portfolio." They know that in the long term, land prices will certainly go up due to increasing population, and have begun to buy large tracts of land, especially in Africa, Latin America, Southeast Asia, and Eastern Europe. Over 80 million hectares (200 million acres) of land – twice the size of France – has been leased or sold in developing countries since 2001 at extremely low prices, mostly to international investors.

Pastoralists and smallholder farmers who have been in areas for many generations are often exiled from their lands that now "belong" to distant pension funds and university endowments who prefer to plant massive palm oil plantations or other crops for export. Many of the projects claim to aid displaced families but this often does not play out on the ground.

Hedge funds increasingly fund mining projects and coal companies. This has made campaigns against specific mines and mining companies more challenging as information on hedge funds is limited and their actions are difficult to influence. Big banks and financial institutions are buying up large quantities of storage units for industrial metals like aluminum and copper as well as gas and oil storage facilities. For example, Morgan Stanley chartered more oil tankers than Chevron in 2009, and Goldman Sachs is the largest owner of aluminum storage houses in the world.

Currently there are only a few functioning water markets (some western U.S. states, Chile, South Africa and Australia have different trading schemes) with no real linkages between them, but Wall Street is working to change that. The chief economist of Citigroup recently stated, "I expect to see a globally integrated market for fresh water within 25 to 30 years. Once the spot markets are integrated, futures markets and other derivatives … will follow. Water as an asset class will, in my view, become … the single most important physical-commodity based asset class, dwarfing oil, copper, agricultural commodities and precious metals."

Many national governments and international bodies see the pricing and selling of water on international markets as absolutely necessary. Different international forums are trying to agree on ways to place a monetary value on water in order to facilitate trade. Once water has a price it will be difficult, if not impossible, to avoid its eventual financialization.

"Carbon" and other virtual commodities

While growing speculation in physical commodities has had negative results, those markets are likely to be much more stable than newly-forming markets for carbon and other "virtual" commodity markets. In the case of carbon, there is no actual commodity to be bought and sold. As Tricarico puts it, "the commodity itself is a derivative – a bet on avoiding projected carbon emissions against a disputable baseline." There are so many ways for the carbon market to be gamed that it is hard to imagine it not being highly vulnerable to price bubbles and crashes. As early experiences with the REDD (reducing emissions from deforestation and forest degradation) market have shown, projects that displace thousands of families and plant massive "green deserts" of palm oil trees are considered to be positive and receive carbon credits to be sold on the market.

Unfortunately, carbon markets are only the first of many environment-centered markets that Wall Street would like to create. It is moving quickly to build markets to trade biodiversity and establish international frameworks to trade species, habitats and ecosystems.

We already see conflicts over land created by distant investors trying to balance their portfolios. If all of these new markets are formed and derivative trading allowed, bubbles and crashes like 2008 will become even more common and encompass even more aspects of life. These markets will increase demand for land which will drive global prices even higher. As financial players own more and more land, it will be Wall Street banks and pension funds making fundamental land-use decisions, further marginalizing the poor families who live on the land and depend on it for survival.

The coming years will be crucial to build the consensus and legal and physical infrastructure for financially enclosing the commons. This quickly shifting panorama offers a host of places for civil society to intervene.

Overall, we must combat the meme that markets, especially financial ones, are the best way to allocate resources. The rich history of commons management needs to be held up as an equitable and sustainable way to manage resources. The fact that the 2009 Nobel Prize in economics went to Elinor Ostrom for her writings on strategies for managing commons is a good sign of the growing acceptance of commons management ideas.

We also must acknowledge that a constantly growing economy on a finite planet will always result in increasing shortages of resources. The global economy must shift toward a steady state economy which extracts resources and disposes of wastes at rates that Earth can accommodate. The sooner the better, as this will help decrease the demand for natural resources.

More specifically, organizations in the U.S. can work to make sure the financial reforms passed in the Dodd-Frank Wall Street Reform and Consumer Protection Act of 2010 are not watered down, or thrown out, in the implementation process. Strong reforms have been proposed, but the final implementation rules being currently defined are crucial. Three key areas are the Volker rule (restricting large institutions from participating in commodity markets), extraterritoriality (regulating international trades), and funding for the Commodity Futures Trading Commission (CFTC) that regulates commodity markets.

National governments, international financial institutions like the IMF and World Bank, as well as international forums like the G20, European Union and UN are also important places to act to stop the laws that turn nature into commodities and establish markets to trade them. For example, the Economics of Ecosystems and Biodiversity (TEEB) study is a major initiative by the European Commission to price biodiversity and aid the creation of biodiversity markets.

Ample opportunities for North-South alliances and campaigns exist around these issues; in fact, it will be important to include the perspectives from both hemispheres in all efforts to make sure that contradictory campaigns are not created. In the end, the biggest struggles will be on the ground as communities fight to preserve their livelihoods.