The following article was written by our colleague Sarah Anderson, who works at the Institute for Policy Studies, and was originally published on the Huffington Post in December. See related NewsNotes articles from September-October 2010 and March-April 2010. 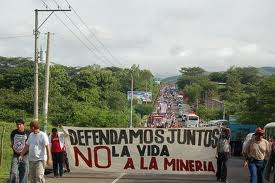 The small country of El Salvador has dared to stand up against powerful international gold mining companies. And now they're dealing with the blowback.

One of the companies salivating over El Salvador's gold is suing the government for their failure to bow down and grant a permit for a proposed mining project. There is strong local resistance to the project because of concerns it could poison a river that is the source of water for more than half the national population.

The company, Pacific Rim, is demanding in excess of $77 million in compensation, alleging violations of "investor protections" under the U.S. trade agreement with Central America.

If Pacific Rim wins, the government will face a stark choice: fork over a huge chunk of taxpayer dollars to a foreign corporation or put their people's health at risk.

But those fighting the case in El Salvador have an increasing number of influential allies in Washington, where the case is being heard at an international arbitration tribunal housed in the World Bank. On December 15, labor, environmental, faith, and other groups turned out for a rally to demand that the case be dismissed. They delivered a letter to World Bank and tribunal officials signed by more than 240 international organizations, including 14 U.S. labor unions.

Particularly notable among them was the United Mineworkers. Although their members' livelihoods depend on the mining industry, they expressed solidarity for those in El Salvador who are resisting this mining project because of the possible repercussions for public health and democracy.

El Salvador is still struggling to transition to representative democracy after years of civil war and there are lingering concerns about political violence. Tim Beaty, director of Global Strategies for the International Brotherhood of Teamsters, spoke about his union's long history of solidarity with unions in El Salvador and said they are still seeking justice in the case of a Teamster organizer, Gilberto Soto, who was killed while he was working to make connections between U.S. and Salvadoran port workers in 2004. In the course of the dispute over Pacific Rim's proposed mining project, four Salvadoran anti-mining activists have been murdered.

The Pacific Rim case is just one example of a growing number of "investor-state" lawsuits over natural resources. An Institute for Policy Studies report, Mining for Profits in International Tribunals, finds that 43 of the 137 pending cases before the World Bank tribunal are related to oil, mining, or gas. By contrast, one year ago there were only 32 such cases and 10 years ago there were only three.

Not surprisingly, this increase has coincided with an increase in commodity prices. The price of gold, for example, has quadrupled, from $282 per ounce in January 2000 to $1,900 in September 2011. Corporations are using expensive lawsuits filed under trade rules as one more weapon to get their hands on these valuable resources.

A new video produced by the Democracy Center in Bolivia tells the broader story of how corporations are using these new powers to push back against all manner of government actions, including anti-smoking regulations in Uruguay, and the growing resistance in many developing countries. Even if Pacific Rim loses its case against El Salvador, the bigger struggle will continue to rewrite our trade rules so that governments don't have to face such outrageous cases in the first place.