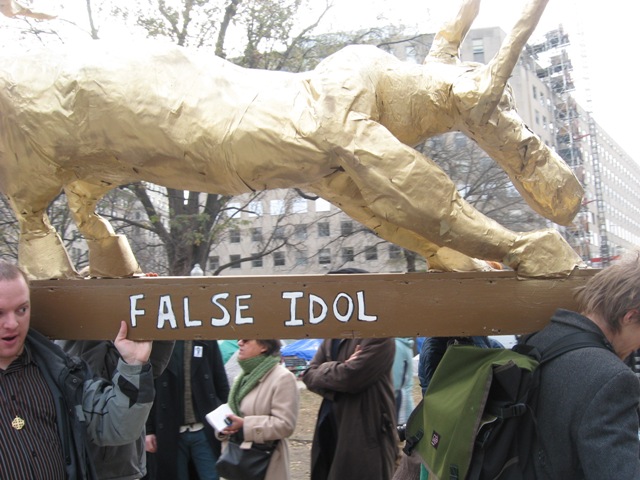 Members of the Occupy Wall Street (OWS) and Tea Party (TP) movements are likely to have much more in common than most would think: Both groups believe the United States would be better off if corporations were treated today as they were for the first 100 years of this country, the way the founders envisioned the relationship between corporations and government.

Founding of an anti-corporate nation

The U.S. Constitution does not use the word corporation, yet as former Supreme Court Justice Felix Frankfurter said, the history of constitutional law is "the history of the impact of the modern corporation upon the American scene." Thomas Jefferson warned about the threat of corporations, saying: "I hope we shall crush in its birth the aristocracy of our moneyed corporations which dare already to challenge our government in a trial of strength, and bid defiance to the laws of our country."

Rarely portrayed as such, the American Revolution was as much anti-corporation as it was anti-government. Before the revolution, most of the entities now known as states were run like corporations chartered by the British government. The Virginia Company and other "pre-states" were granted to individuals and run by their will. The Virginia Company was known for being especially ruthless in its treatment of workers, including children. In an effort to revoke the Company's charter, one stockholder in 1664 complained that of the approximately 6,000 adult and child workers who had been sent to the colony since its foundation, an estimated 4,800 had died from overwork and terrible working and living conditions. In Gangs of America: The Rise of Corporate Power and the Disabling of Democracy, Ted Nace uses original writings to paint a harrowing description of life in Virginia at the same time that reports to Virginia Company investors and potential workers portrayed a utopia for workers  not too dissimilar from corporate reports today describing their workshops overseas.

The Boston Tea Party was as much a protest against the East India Tea Company as it was against the British crown that was helping to create its monopoly. The Company was deeply in debt due to overexpansion and was facing heavy competition from small businessmen in the colonies who were buying tea from Dutch traders and smuggling it in small ships. After pressure and lobbying from the Tea Company, the British government passed the Tea Act of 1773. Some think the Act only increased the taxes on tea paid by colonists, but it went far beyond that: It exempted the Company from taxes on tea exported to the colonies and even gave a tax refund on the millions of pounds of tea they hadn't been able to sell. Since the Company didn't have to pay taxes and was given extra money, it was able to lower its prices and undercut small businesses in the colonies  does this sound at all familiar to the recent banking crisis? Thom Hartmann's book Unequal Protection quotes original documents from people involved in the Boston Tea Party who sound quite similar to people today struggling against trade agreements, including solidarity protests in England by people affected by the Tea Act there.

When the same merchants who fought the Tea Act and experienced life under the Virginia Company wrote their new Constitution, they were very careful to place strong controls on corporations, in the same way that they wanted to restrict the power of government officials. The chartering of corporations  establishing the existence of corporations and the rules by which they operate  was placed in the hands of state governments, which at the time were the only directly elected bodies. They didn't want corporations to be able to become so powerful again. For the first 100 years of the new nation, corporations were created to do public works projects that the government did not want to do with government workers.

The states, almost unanimously, wrote charters with the following characteristics. First, charters for new corporations were rarely granted, and only if necessary to serve the common good; the corporation was established for a set period of time ranging from three to 50 years, usually 10 to 20 years; banks were limited to three-year charters in many states. The corporation had a specific purpose (for example, to build two bridges across a river); it was only allowed to own as much land and capital as was necessary to complete its social purpose; it could not be involved in politics; it could not own stock in other corporations; and it was limited to operating only within a state or even a single county. Some states only chartered banks through direct referendums. Corporations' charters were routinely revoked for breaking any of these and other statutes. After having its charter revoked, the corporation was divided up among its investors. The idea of the corporation was to serve a public purpose while making an adequate profit for its investors.

While a fundamental divide between the Tea Party and Occupy Wall Street is that the former tends to look back in time while OWS members tend to look forward, in the case of corporate power, a harkening back to the early days of this country really does point the way to a positive future. Bringing back the mentality of the Founders toward corporations would be a significant and constructive step forward.