During his eight years as Brazil's president (2002-2010), Luiz Ignacio Lula da Silva succeeded in drastically diminishing deforestation in the Amazon, the world's largest rainforest. In 2005, Lula pledged to further reduce the problem by 80 percent in 2020. But a law signed in mid-December by current president Dilma Rousseff will likely undermine that goal and result in a significant increase in deforestation and greenhouse gas production. 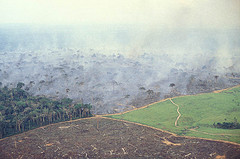 The law revises the Forest Code of 1965 that required landowners in the Amazon to preserve parts of their land as virgin forest and prohibited the clearing of environmentally sensitive areas like hills, steep slopes and river margins. The new law requires much smaller protective margins for rivers and allows farming on hills and slopes. Owners with fewer than 400 hectares (600 acres) are exempt from this forest reserve requirement for the first time ever which will open hundreds of thousands of acres of forest to possible, or probable, deforestation.

An especially controversial part of the new law is its granting of amnesty from any prosecution or fines to anyone who deforested illegally before June 2008. Many environmentalists think this proposed change is in large part responsible for the 37 percent increase in deforestation from 2010 to 2011 in the western state of Mato Grosso where the majority of Amazon soy plantations are located. Most landowners are betting that they will be able to convince regulators that their trees were cut down before 2008.

The Brazilian Conference of Bishops reacted to the proposed law with a strongly worded statement reading, in part, "The project… condemns entire regions of the country to live with distressed rivers, buried water sources/springs and species in extinction… [It] weakens the protection of conserved forests, permitting an increase in deforestation."

In a letter to President Rousseff asking her to veto the bill, a group of Brazilian environmental organizations lamented how Brazil would never be able to live up to its international climate promises. "Last week we heard with disappointment our government stating at COP 17 [climate negotiations in Durban, South Africa; see related article here] that the law will help Brazil to deliver its emission reduction goals… Unfortunately, the truth is that those changes [to the Forest Code] will lead into massive destruction of our forests and emissions of greenhouse gases to the atmosphere."

The passing of this law shows the strong influence that large scale agribusiness continues to have in Brazil. An investigation by the newspaper Folha de Sao Paulo showed that large land owners who will have standing fines against them for past deforestation removed because of the new law gave $15 million to at least 50 members of Congress during the months that the new Forest Code was being negotiated. As an analysis by iBase, a prominent Brazilian think tank, opines, "The substitute for the Forest Code approved by the Senate doesn't come to protect the forests, but agriculture, especially, that for export."

The fact that President Rousseff signed this law, in addition to okaying the disastrous Belo Monte system of dams in the southern Amazon, shows that, like other progressive presidents in the region such as Evo Morales (Bolivia) and Ollanta Humala (Peru), she is still heavily influenced by big business and is willing to continue to sacrifice the planet in favor of economic growth.