Across the planet, every day thousands of people face the devastating consequences of war and armed violence. Illicit gun trafficking causes bloodshed, poverty and human rights abuses. In response, a worldwide civil society alliance is calling for a "bulletproof" Arms Trade Treaty (ATT): a global, legally binding agreement that will ease the suffering caused by irresponsible transfers of conventional weapons and munitions. The Maryknoll Office for Global Concerns joins Pax Christi International and many other communities of faith advocating for this treaty. 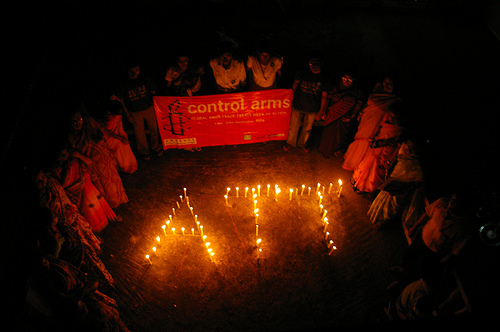 The negotiation process for the ATT started with a UN General Assembly resolution in 2009. Preparatory meetings were held in 2009, 2010 and 2011. In July 2012, a UN conference will be held where the final text will be negotiated. A strong and effective ATT that has a real impact on people's lives should be delivered. Pax Christi International and many of its member organizations are already engaged in the global civil society movement advocating for a strong ATT. Two faith-based campaigns are contributing effectively to this effort.

One is the Control Arms Interfaith Campaign for an Arms Trade Treaty, led by an Interfaith Working Group, including Pax Christi International. Frequently, religious leaders and communities are the first to recognize and speak up about the devastating impact of the irresponsible use of arms and the moral duty to regulate the trade of these deadly devices. The purpose of the Control Arms Interfaith Campaign is to raise awareness among religious leaders, communities and faith-based organizations about the Arms Trade Treaty.

As part of the campaign, several member organizations of the Control Arms Coalition published a "sign-on" Interfaith Declaration in Arabic, English, French, Portuguese, and Spanish. It reinforces calls that have already been made by individual faith leaders and organizations for a strong, robust and morally-based ATT. The declaration will be delivered to governments ahead of the ATT negotiations in July. It begins:

Every year, communities are divided or destroyed and millions of people are killed, injured, raped, and forced to flee from their homes as a result of war and armed violence. The poorly regulated global trade in conventional arms and ammunition fuels conflict, poverty, gender-based violence and human rights abuses. Such injustices are an affront to human dignity and the sacredness of life.

As the world's governments convene to negotiate a global Arms Trade Treaty, we, as religious leaders and communities, faith groups and faith-based organizations urge them to negotiate in good faith an effective ATT that will reduce the human suffering caused by irresponsibly traded weapons…

We raise our collective voice to call on all governments to work together to save lives and end the human suffering caused by irresponsible transfers of conventional arms. Furthermore, we urge governments to remain mindful of the humanitarian imperative that drives this process and find a solution that moves all nations further along the path to peace and development.

This is a chance for all involved to make history, to uphold human dignity, and to save lives.

Another campaign supported by Pax Christi is the Ecumenical Campaign for a Strong and Robust Arms Trade Treaty of the World Council of Churches. Representatives of churches, related agencies and networks in 27 countries are participating in this campaign, believing that local religious communities can play an important role in the lead-up to the final negotiations for the treaty. Local communities, congregations and churches around the world are often witness to the ways in which armed violence fuels insecurity, breaks up families and escalates conflicts. The Ecumenical Campaign is urging people of faith around the world will collect these stories and send them to world leaders when they gather at the UN as part of a coherent campaign with a common message: "Yes, I support a strong and robust Arms Trade Treaty that will protect and save lives"

Other activities suggested by Pax Christi to mobilize public awareness and advocacy include:

A strong and robust Arms Trade Treaty will make illegal arms transfers difficult and will save lives. Please read the full Declaration and sign it by sending an email to Control Arms.