HIV, AIDS: No time for complacency

Representatives of churches and Christian organizations campaigning together on HIV and AIDS through the Ecumenical Advocacy Alliance (EAA) have welcomed a new report that shows how the scale-up in HIV treatment is beginning to deliver results: nearly 50 percent (6.6 million) of the 14.2 million people who are eligible for antiretroviral therapy in low- and middle- income countries were accessing life-saving treatment in 2010, an increase of 1.35 million since 2009. The report, released by UNAIDS in late November, also estimates that 2.5 million deaths have been averted in low- and middle- income countries due to increased access to HIV treatment since 1995.

While acknowledging this achievement, faith representatives warn that now is not a time for complacency, insisting that funding must be sustained and be more focused on communities that have thus far not had access to treatment.

In addition, EAA members are calling for support for innovative initiatives such as the Medicines Patent Pool, which could prove vital for speeding up the development of essential new fixed dose combinations, increasing access to newer, more effective treatments, and stimulating production of pediatric formulations. (See related story here.)

The imperative for further treatment scale-up is illustrated by encouraging early signs that increased treatment access is also reducing the number of new HV infections. This is in line with groundbreaking research released in 2011 that showed that as the viral load of a person living with HIV is reduced by treatment, it also reduces the risk of transmitting the virus to an uninfected partner. The report notes, however, that treatment alone will not achieve the goal of zero new HIV infections: a comprehensive approach that takes into account social and behavioral norms and practices remains vital.

"We welcome the ongoing commitment of UNAIDS to changing behaviors, changing social norms and changing laws, alongside efforts to improve access to HIV treatment," Erlinda Senturias, HIV and AIDS Consultant, Christian Conference of Asia, said. "To do this, it is vital that governments, civil society, faith-based organizations and religious leaders work together. When we invest in community education we can address violence towards women, improve sexual and reproductive health and eliminate stigma and discrimination against those on the margins of our society. All of these changes will help stop HIV as well."

The latest statistics also show a reduction in children who were born with HIV, with AIDS-related deaths among children younger than 15 down by 20 percent since 2005. "We are seeing a positive impact of greater access to ARVs – both for women and children who need them," said Fr. Robert Vitillo, Caritas' Special Advisor on HIV and AIDS. However, he cautions, "we still have a long way to go; of people living with HIV in sub-Saharan Africa, women make up 59 percent, yet less than 50 percent of pregnant women living with HIV have access to treatment to keep themselves healthy and to prevent transmission of HIV to their babies. The situation of children living with HIV is even worse: some 390,000 were newly infected during 2010 and only 21 percent of all infected children had access to the treatment they so desperately need to stay alive beyond their second birthday."

Sadly, just as positive news about the AIDS pandemic was announced, the principal international agency that channels funds to HIV and AIDS treatment, the Global Fund to Fight AIDS, Tuberculosis and Malaria, announced that it has no money for the latest round of grants and is suspending all new projects following cuts by donors in high-income countries. 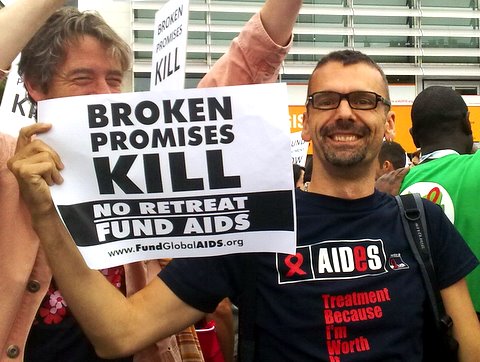 In response to the Global Fund's announcement, Stephen Lewis, former UN Special Envoy for HIV and AIDS in Africa, said, "No one expected a complete cancellation of Round Eleven, with new money unavailable for implementation until 2014. It's just the latest blow in a long list of betrayals on the part of the donor countries, in this instance the Europeans in particular…Certain governments on the Board of the Global Fund simply discredited themselves. They give a soiled name to the principle of international solidarity…The decision on the part of the donor countries is unforgiveable. .. Spare me … the economic crisis. Everyone knows that when it comes to financing wars, or bailing out the banks, or bailing out Greece, or reinstituting corporate bonuses, or even responding to natural disasters that threaten economies, there's always enough money. We're drowning in crocodile tears. It's not a matter of the financial crisis; it's a matter of human priorities. We have a right to ask the G8: what do you sanctify as governments, profits and greed or global public health? That's especially true in the case of the United States." (Go here to read Lewis' entire speech.)