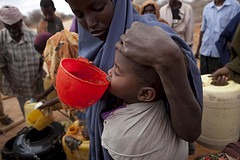 Last December, in a report to the Human Rights Council, Olivier De Schutter, the UN Special Rapporteur on the Right to Food, pointed out that in the "context of ecological, food and energy crises, the most pressing issue regarding [agricultural]  investment is not how much, but how." This fourth article in our series of six focused on African food security explores the impact of climate change on African agriculture and points to the critical need for investment in technologies that work to ensure food availability while increasing both incomes for smallholder producers and their resilience to climate change.

For many people in Africa, climate change does not pertain to some distant future. Climate change's telltale signs including more frequent and extreme weather events, droughts and floods and less predictable rainfall are already having a severe impact on the ability of African communities to feed themselves. These factors are driving hundreds of people living in rural areas off their land causing them to become "climate migrants."

Changes in average temperatures are threatening normal levels of agricultural production in many regions, particularly those dependent on rain-fed agriculture. According to the Intergovernmental Panel on Climate Change (IPCC), arid and semi-arid areas in sub-Saharan Africa are projected to increase to 90 million hectares, and in Southern Africa, it is estimated that yields from rain-fed agriculture could be reduced by up to 50 percent in the next eight years. The current drought conditions in the Horn of Africa are caused by successive seasons with very low rainfall. Since meteorological data has not been collected over a number of years in this area, there is no scientific evidence to "prove" that the current drought is climate change related. However, surveys of local pastoral communities in Ethiopia show that this drought is part of a long-term shift; in the past droughts were recorded every six to eight years, whereas now they occur every one to two years.

The inequity involved in the climate threat to food security in Africa is profound. Compared to the rest of the world most African countries lag significantly behind in terms of the level of industrialization, fossil-fuel-based energy use and lifestyle patterns that cause climate change, yet the people of rural Africa are more directly suffering the consequences of higher global temperatures from mostly northern greenhouse gas emissions.

In spite of the fact that most people in Africa still live in rural areas and agriculture accounts for a significant portion of the GDP in most African countries, over the past 25 years, little attention was given to investments in African agriculture and rural development. In fact, many of the structural adjustment programs designed to provide debt relief demanded drastic cuts in public spending  including agricultural extension programs (see NewsNotes, March-April 2011). This trend is beginning to shift. According to the UN Conference on Trade and Development's World Investment Report 2009, foreign direct investment in global agriculture went from $6 million annually in the 1990s to an average of $3 billion in 2005-2007. And after the 2007-2008 global food price crisis many more initiatives like the World Bank's Global Agriculture and Food Security Program, the L'Aquila Food Security Initiative, Feed the Future, and others began to leverage significant funding for international agricultural development, with a strong emphasis on the African continent.

The focus of many of these investments has been on improving seeds and inputs to increase yields, basically expanding northern industrial agricultural models to less industrialized, southern and mostly African countries. According to studies, however, industrial agriculture contributes about 30 percent of the greenhouse gas emissions that cause climate change largely because of the role it plays in deforestation. One of the biggest culprits is industrial-scale livestock production as noted by a 2006 UN study, "Livestock's Long Shadow" (NewsNotes, March-April 2009) because of the deforestation involved and because of the methane gas produced by ruminant animals.

Whether or not these new investments are climate appropriate is complicated by the fact that agribusiness companies are launching massive campaigns to "greenwash" their intentions by claiming that they are developing climate solutions to feed the world. One of these "inventions" is drought-tolerant seed. The irony of this is that many of the indigenous seeds that traditional African farmers have saved and exchanged over generations are widely known to be drought-tolerant or drought resistant. The seed varieties now being tested and used to invent this "new technology" have been in Africa for generations. The "added benefit" contributed by corporate technological development is that they are now being turned into patented hybrid varieties that will require farmers to return to buy more.

In The State of the World 2011 Brian Halweil and Danielle Nierenberg refer to seeds as "elegant vessels for delivering new technology to a farm." Techniques for improving soils, making better use of rain-fed farms, growing crops other than grains, and other farm landscape investments could make all the difference for farm productivity, for sequestering carbon and for climate adaptation planning. But because few companies have figured out how to profit from rebuilding soils and aquifers, these projects have been neglected.

"Greenwashing" and hidden motives to make a profit are being watched closely by farmer movements throughout Africa and the world as climate change negotiations continue at the end of this year in Durban, South Africa. Last year in Cancún at the UN Framework Convention on Climate Change Conference of Parties, a "Reduce Emissions from Deforestation and Forest Degradation" (REDD+) plan was approved which "encourages developing country Parties to contribute to mitigation actions in the forest sector by undertaking the following activities, as deemed appropriate by each Party and in accordance with their respective capabilities and national circumstances: (a) Reducing emissions from deforestation; (b) Reducing emissions from forest degradation; (c) Conservation of forest carbon stocks; (d) Sustainable management of forest; and (e) Enhancement of forest carbon stocks."

All of this sounds good, but traditional and indigenous farmers who rely on the biodiversity of established forest areas worry that REDD+ views forests simply as "stores of carbon" rather than ecosystems. The wording is so vague that "sustainable management of forests" could include subsidies to industrial-scale commercial logging operations in community old-growth forests. And "the enhancement of forest carbon stocks" could result in conversion of land (including forests) to industrial tree plantations, with serious implications for biodiversity, forests and local communities. Traditional farmers also share a deep concern that the focus on income generation through carbon trading encourages northern industries to "pay to keep polluting," or to be paid twice by establishing plantations of mono-cropped trees to get carbon credits and then later selling those same trees or their fruits for fuel, fiber or food.

As solutions to food insecurity are being evaluated and implemented it seems that although climate considerations are part of the talking points, productivity and profit still surface as among the top criteria. As children of God charged with caring for creation and for one another, the future looks daunting as long as solutions that copy industrial production, unequal distribution and overconsumption are used. Now is the time to work to improve the sustainability of ecosystems by imitating nature instead of trying to tame, control and harvest it for profit as industrial models tend to do. This means that there has to be a shift in focus from a "cash-based return on investment" to a "sustainable future-based return on investment."

Climate change and Earth's diminishing resources invite those of us in northern countries to make the shift in worldview that Jesus spoke about in Luke 12, the parable of the rich man who builds larger and larger storage bins to hoard the great abundance that his lands produced. The story doesn't end well for the rich man, and Jesus goes on to say, "Consider the ravens: they neither sow nor reap, they have neither storehouse nor barn, and yet God feeds them." Jesus gives us the hint that God will care for us with the gifts of creation  as long as we work with, and not against God's abundance (which is meant for all of creation).

In this light, the world has a great deal that it can learn from thousands of traditional farmers in rural areas who model sustainability by having evolved and adapted to ever-changing environments, developing diverse and resilient farming systems in response to different opportunities and constraints over time. Their models of saving and sharing seeds, enhancing the organic content of soils, water harvesting and management, crop diversification, intercropping, pest management and climate forecasting are exactly the tools that should be studied, shared and disseminated to provide the best chance of future food and climate security.