Sudan has long generated a plethora of academic reports and think-tank analyses, especially in times of heightened insecurity and great political moment. Following the country's division into two states, current conflict in border areas has given rise to a flurry of such documents. What follows are excerpts from the latest installment of IRIN's irregular series of overviews.

The International Crisis Group (ICG) warns of a growing risk of war on multiple fronts. "After the end of the CPA [Comprehensive Peace Agreement, signed in 2005], rather than negotiate with Sudanese opposition forces, NCP [the ruling National Congress Party] hardliners have opted for a military solution - not an unusual policy response - when confronted with opposition. This, however, is pushing Sudan's disparate rebel movements and opposition forces together and could trigger a wider civil war for control of the country."

Post-CPA, there is no coherent political framework to deal with the many remaining challenges in Sudan, with international attention focused on safeguarding South Sudan's referendum and independence largely having underestimated the impact of secession on the north, the report says… 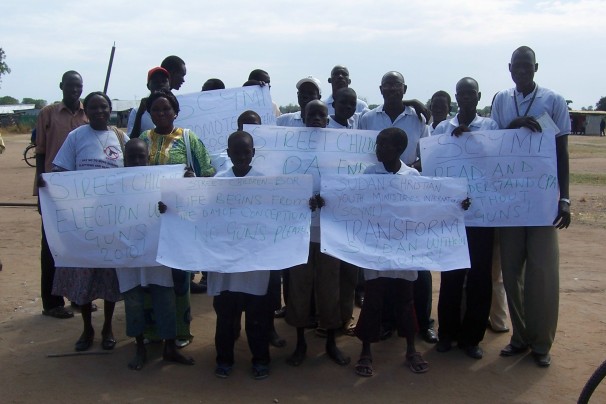 According to a report by Germany's University of Halle, The genesis of recurring wars in Sudan, "the resurgence of armed conflict in the Nuba Mountains [in South Kordofan] implies that the CPA was not a 'comprehensive' and 'final' settlement accord to northern Sudan's recurring political conflicts. It was rather a long-term 'truce' or 'ceasefire,' as far as the northern Sudan is concerned.

"...The heavy shooting that occurred in South Kordofan's capital Kadugli on June 5 was not the beginning of something new. It was rather the climax of several concomitant violent processes; which had taken different forms and had occurred on different levels throughout the CPA transitional period and before, and include events seemingly far away….This perpetuation of war logic [has] prevented the development of plural voices and new ways, which are needed for non-violent political alternatives to historical injustices and inequalities. In conclusion, the unceasing militarization of society will continue to inhibit breaking the vicious cycle of fragile peace and recurring wars."

Poverty and severe marginalization of the peripheries, combined with poor governance, are at the center of continuing conflicts in Sudan, says a report by Sweden's Uppsala University, The crises continue - Sudan's remaining conflicts. With regional inequity having fostered frustration and created a hotbed for rebellion, there is a need for decentralization, it states, adding that "the government's propensity for using militias and divide-and-rule strategies has to stop for a brighter future for Sudan." The report further recommends that the various crises be addressed in tandem as so far, "the international community has shown a clear lack of ability to deal with the different regions of Sudan simultaneously ..."

In a December 6 letter to the UK's Foreign Secretary, William Hague, the UK Parliament noted that "the scale of death and suffering caused by the ruthless military offensives against the peoples in South Kordofan and Blue Nile; the denial of access to international investigators or to the media as well as the refusal to allow access by aid organizations to victims of military offensives; and the catalogue of reports of violations of human rights, including unwarranted arrests, torture and threatened executions would seem to warrant a stronger response than continuing dialogue..."

The conflict could worsen. The SPLM-N and JEM, as well as two factions of the SPLM/A, recently signed a declaration in Kauda, South Kordofan, establishing the Sudan Revolutionary Front, whose aim is to overthrow the NCP using all available means, above all, the convergence of civil political action and armed struggle, according to a communiqué, says a late November field dispatch from the Enough Project….

The oil-producing greater Upper Nile comprises Jonglei, Unity and Upper Nile states, where ongoing armed insurgencies are claiming to seek changes to the Juba-based government or to overthrow it, according to a recent report by Small Arms Survey.

The greater Upper Nile forms much of South Sudan's border with Sudan and small arms stocks are widespread in the region, despite numerous civilian disarmament campaigns …

On December 14, the UN Security Council expanded the mandate of the UN Interim Security Force for Abyei to include assistance in border normalization due to the recognition that "the situation in that area constituted a threat to international peace and security."