The Story of Broke

Following Congressional debates and statements of presidential hopefuls in 2011, one would believe that the United States is out of money. Though this narrative has dominated U.S. political space, analysts at the Institute for Policy Studies (IPS) and the Story of Stuff Project believe that some key changes in tax and spending policies could free up money for building a better future. 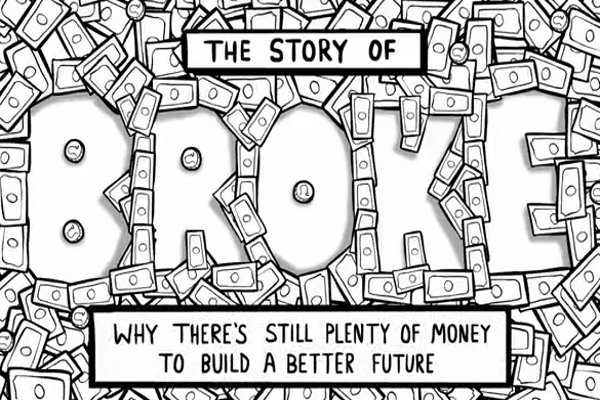 In 2007, The Story of Stuff, a 20-minute video, gained popularity in schools and faith groups as it used humor and clever animation to expose the dark side of U.S. production and spending patterns; it prodded people to connect the dots between over consumption, diminishing resources and environmental degradation. With over 15 million views to date, the success of the video project points to people's hunger to understand the connections and find solutions.

The Story of Stuff Project gave birth to six similar videos pointing to some of the issues underlying the poor state of ecological, political and economic health in which we find ourselves as a nation. The latest video, The Story of Broke, directs attention to some of the dreadful choices that are made in spending taxpayers' dollars. In a similar regard, America is Not Broke, a recent report by IPS, challenges the "America is broke" narrative proposing 24 fiscal reforms that would go a long way to make the country more equitable, green and secure.

The military takes the largest portion of tax dollars. The Story of Broke pegs that amount at $726 billion in 2011. America is Not Broke recommends ending the war in Afghanistan, reducing the number of U.S. military bases and eliminating programs that are wasteful and obsolete for a savings gain of about $252 billion. According to a study by the University of Massachusetts cited in the IPS report, for every $1 billion devoted to military production, 11,000 jobs are created, but a billion dollars invested in clean energy would create 17,000 jobs, while the same $1 billion investment in education would create 29,000 jobs. IPS and other collaborating organizations release a Unified Security Budget for the United States every year which identifies tens of billions of savings that can be made without sacrificing U.S. security including cuts to the U.S. nuclear arsenal, eliminating under-utilized aircraft and unnecessary weapons, pruning back outsourcing and nuclear weapons complex cuts.

Hundreds of billions of dollars go to propping up what The Story of Broke calls "the dinosaur economy," the economy that "produces more pollution, greenhouse gasses and garbage than any other on Earth – and doesn't even make us happy." The government often gives away things that should be thought of as resources available to all. Much of this in the form of subsidies or "freebies," like granting permits to use public lands for mining or other business activities that tend to contribute to ecological degradation. The Story of Broke recommends reinvesting (for example) "$10 billion in oil and gas subsidies to renewable energy and energy efficient projects," claiming that with just half that amount solar systems could be installed on over two million rooftops.

While the fossil fuel economy is still going strong regardless of the reality of peak oil, IPS recommends taxing pollution in addition to cutting corporate subsidies that harm the environment. While it is difficult to project revenue estimates because consumer and producer activity would likely change in the face of new pollution taxes, a study published in the Harvard Environmental Law Review shows that a modest tax on emissions from fossil fuels alone could raise somewhere between $75-100 billion per year. Taxing the "bads" of society, like pollution, has been a solution offered by Herman Daly and other steady state environmental economists. Such a tax could go a long way to dissuade polluters and to redirecting tax revenue toward public goods.

While The Story of Broke only mentions it in passing, IPS argues that another key revenue generator could come from taxing Wall Street, corporations and the wealthy. Over the past decades the number of tax cuts for wealthy people and corporations are have been a contributing factor toward the current budget challenges the country faces. In addition to reversing the Bush-era tax cuts for high-income households, IPS recommends taxing high-frequency trading which accounts for 55 percent of the equity trades in the United States. A modest tax on the buying and selling of stock could slow down the kind of casino-style speculative trading currently taking place while generating $150 billion per year. Other solutions would include closing the loopholes that facilitate using tax havens to dodge taxes owed in the United States; limiting corporate tax deductions on stock options, a progressive estate tax on large fortunes and the creation of additional tax brackets for people earning more than $ 1 million per year while eliminating the tax preference for capital gains and dividends.

It is definitely time to change the "America is broke" narrative. But to do so we must begin reversing tax policy, curbing subsidies and unnecessary military expenditures. While these solutions are somewhat unpopular as topics in presidential and congressional candidate debates – there's still an opportunity to take back the political system and make it work for Main Street!