What would happen if governments more faithfully implemented their positive obligations to respect, protect and fulfill the full range of human rights? What would happen if ensuring equality and freedom from fear and want were pursued as aggressively as markets and growth?

On December 5, 2011, the Office of the High Commissioner for Human Rights (OHCHR) convened a panel of eminent experts, among them Joseph Stiglitz (below), professor of economics at Columbia University and 2001 Nobel Prize recipient, to discuss the notion of putting people at the center of development and economics. The event highlighted the birthday of the Declaration on the Right to Development, a document that was designed to put people at the center of development and economics but which seems not to have achieved the goal for which it was designed. Today, 25 years later, the world is still grappling with the collapse of the market and decades of unchecked economic and environmental pillage that have led to economic, food and energy crises. The issue of unpredictable climate change has eclipsed these basic issues as the world faces the increased threat of global economic breakdown and an increase in human rights crises. The failure of the 25 year old declaration can only be attributed to lack of political will on the part of governments that have not placed people at the center of development. Stiglitz's question is: what led to this financial crisis and what ought to be done to stop it from happening again? 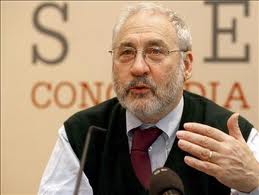 The reality is that the long term issues continue to worsen as the global economy slows down. In some parts of the world, poverty is worse and unemployment has risen. The UN Commission of Experts once recommended that while focusing on the short term issues, it is necessary to keep the long term issues in perspective. Therefore, in order to effectively address the long term problems, it is necessary to do so in ways that are consistent and sustainable, that is, by putting people at the center of the development agenda. This approach has been proven effective by such countries as India: Its Supreme Court made a decision to focus on childhood nutrition and instituted a nationwide program as a way to promote quality education and provisions for future job markets. As a result, India created the largest employment scheme that, despite many difficulties, actually played an important role in insulating the country from the global crisis of 2008. This rights-based approach extends far beyond putting people at the center to considering the people's right to a clean environment as well as the right to health through access to medicines.

Granting the right to development assures a nation's well-being. However, when pharmaceutical companies claim intellectual rights by placing patents on medicines, the people's right to health conflicts with these intellectual property rights. Stiglitz then asks: Are intellectual rights more important than the right to life? Most people would agree that the right to life is more important than intellectual property rights. In order to survive, people need capital that will enable them to access both education and health. However, the market system has instituted the right of free mobility of capital which subjects economic markets to high volatility causing the people to endure increased unemployment and cut backs in basic services. Therefore, when the rights of capital conflict with people's rights, and when governments fail to put people at the center of development, can international law protect the people?

International law sets rules and regulations that end up causing harm to the less powerful developing countries due to an imbalance of power. Stieglitz objects to the intellectual property regime which, he says, "is shaped by pharmaceutical companies and entertainment industries." Investment agreements take away sovereignty and democratic accountability of the host countries while promoting the interests of corporations over that of people and development. Therefore, agreements ought to take into account development that is sustainable and "people centered." These agreements also include the climate change agreements which Stiglitz thinks should be crafted in ways that are consistent with promoting development. This is not about not reaching an agreement; that impinges on the right to development. That is to say, if nations do not reach a climate change agreement, the phenomenon will particularly adversly affect on those in the developing world. And so, while the form of agreement has consequences, not reaching an agreement also has consequences for the right to development.

Not only does development have to be sustainable but it has to be focused on improving the well-being of more citizens by giving them the opportunity of participation and voice because poverty is not only lack of income but also about people living in insecurity and not having a say in what affects their lives.

The basic ideas of the panel are that markets are often unreliable because most of the time they are unstable. Even when markets succeed in increasing gross domestic product (GDP), the typical indicator of a nation's standard of living, GDP growth does not necessarily mean that more citizens are better off. One motto of the Occupy Wall Street and similar movements around the world is "We are the 99 percent." In other words, markets have failed a very large majority of citizens. Through these refrains people are also saying that the political processes have not been able to correct the way the markets work. They are not giving a solution but a clear declaration that the system has not been working the way it should and something needs to be done. The idea of "putting people at the center" is not always easy to put into practice but it ought to be the guide to any human rights based development scheme.

Learn more about the December 5 panel and watch its webcast on the OHCHR website.