Cluster munitions are large weapons that release dozens or hundreds of smaller submunitions called "bomblets" if the cluster munitions are released in the air or "grenades" if they are delivered from the ground by artillery or rockets. The Cluster Munition Coalition (CMC) is a network of more than 350 civil society organizations working in about 90 countries to end the harm caused by these bombs. 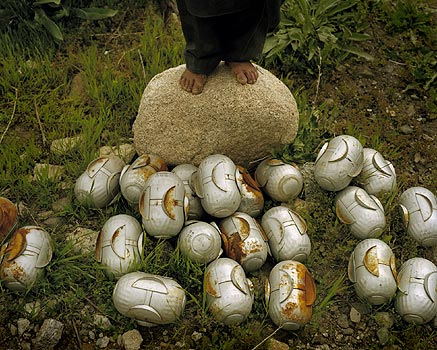 Whether air-dropped or ground-launched, cluster bombs' widespread dispersal means they cannot distinguish between military targets and civilians so the humanitarian impact can be extreme, especially when the weapon is used in or near populated areas. Many submunitions fail to detonate on impact and become de facto antipersonnel mines, killing and maiming people long after the conflict has ended. These duds are even more lethal than antipersonnel mines as they are much more likely to cause death than injury.

Cluster bombs have killed and injured thousands of civilians. They cause widespread harm on impact and yet remain dangerous, killing and injuring civilians long after a conflict has ended. One third of all recorded cluster munitions casualties are children. Sixty percent of cluster bomb casualties are injured while undertaking their normal activities.

In February 2007, 46 governments met in Oslo to endorse a call by Norwegian Foreign Minister Jonas Gahr Støre to conclude a new legally binding instrument to prohibit the use, production, transfer and stockpiling of cluster munitions that cause unacceptable harm to civilians, as well as to destroy existing stockpiles of the weapons, clear contaminated areas and assist survivors and affected communities. Over one hundred countries negotiated and adopted such a treaty in May 2008 in Dublin, Ireland. The treaty was signed by 94 countries at the signing conference in Oslo in December 2008 and entered into force as binding international law on August 1, 2010, after it reached the threshold of 30 ratifications in February 2010, just 15 months after it opened for signature. All countries can still accede to the treaty at the United Nations headquarters in New York. To date 111 states have done so.

But over 500,000 people signed a petition asking governments to align any new agreement with the existing ban under the CCM, ensuring that this indiscriminate weapon will continue to be comprehensively banned and lives protected. Further, on November 23, 2011, a group of 36 states expressed their discontent with the proposed protocol, stating that, if adopted, it might result in more human suffering and hamper economic and social development. One day later, this group grew to 48 countries. Opposition was led by Norway, Austria and Mexico, with powerful support from the Cluster Munition Coalition, the International Committee of the Red Cross and a large number of UN agencies, notably the UN Development Program, the Office for the Coordination of Humanitarian Affairs and the Office of the High Commissioner for Human Rights.

This ends four years of negotiations on this issue and strengthens the CCM, which, like the 1997 Mine Ban Treaty, prohibits the use, production and transfer of an entire category of weapons and promotes the rights of victims and survivors.

For additional information, go to the Convention on Cluster Munitions website.